For years it has been notoriously difficult to get hold of: the morning-after pill.

In Japan, for a woman to receive emergency contraception, she has to go to a doctor and get a prescription. And it’s expensive, too.

But women have been campaigning for years to remove the barriers blocking easy access to the morning-after pill, which is surely one of the reasons for so many shotgun weddings in Japan (including among many prominent celebrities). The current system is condemned as shaming and discriminatory, and is particularly a problem for victims of sexual assault, whose treatment by police is already often bad enough that they must also suffer an appointment and examination to receive emergency contraception.

Now, it seems, finally the politicians are listening. Or might be. According to media reports, the government is considering to ease restrictions and make the morning-after pill available without a prescription as early as next year.

A safer, low-dose form of oral contraceptive only became legal in Japan in 1999 after a decade of wrangling — notably after the male-dominated lawmakers got Viagra authorized in just six months. But the medical establishment has been notably reticent about allowing the morning-after pill to become more easily available, citing the potential “irresponsibility” of women (as opposed to the, er, responsibility of the men in Japan who have sex without condoms). 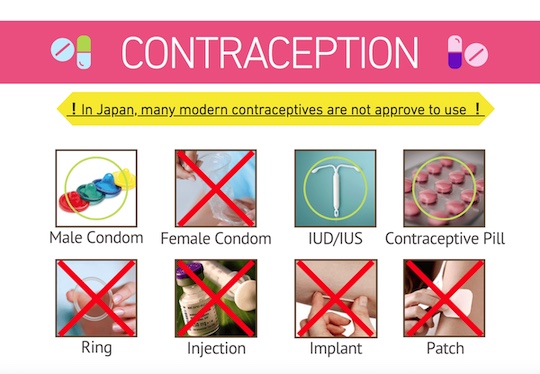 The vice president of the Japan Association of Obstetricians and Gynecologists edified the masses on a morning TV show in the summer. “If we make the morning after pill more accessible, I’m worried that young women will think, ‘Oh, I can just use it again next time’ and not take it seriously.”

His now-notorious comments sparked fury among women and a backlash online. A petition calling for non-prescription sales of the drug has attracted tens of thousands of signatures.

Activists, who produced the guide in the image above, are asking for better sex education, full availability of other types of contraception in Japan, and the legalization of medical abortions.

For once, it appears that the government might be listening.