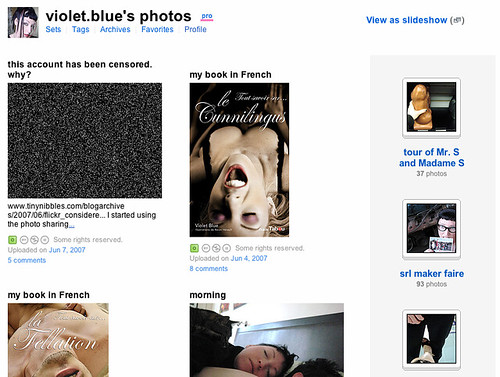 The apology email I got from Stewart at Flickr is below. It is deeply appreciated:

I’ve set your account back to ‘safe’, though I’ve also set
several of your photos (individually) to the ‘moderate’
setting and one or two to ‘restricted’.

Scott Beale pointed out your blog post and the issue to me
— I’m Flickr’s general manager (and one of the
co-founders) — and I understand your frustration. Short
version: I’m sorry.

Some of it is just a side-effect of the nuances and
complexity of issues we’re trying to address — it’s hard
to be explicit about *exactly* how much breast being
visible marks the difference between safe and moderate, and
most people are able to make a general distinction along the
lines of, say, G, PG-13 and R — but we also have real
problems with the way this is communicated and the way it
is implemented: you should not have to wait 30 days, and
what we’re asking you to do should be made much clearer.

(And, it should be clearer to viewers how to switch off
safe search, along with a few other things. The goal is
definitely not to censor in the sense of make things
unavailable, but to allow viewers some self-determination
in what they want to see. Still a ways to go here.)

All of the problems in our implementation have been
recognized for a while. Several tweaks and fixes have
already been made, more and in process, and we’re still
deciding how best to address a few others.

In the end, if your mind is made up and you move your
photos somewhere else permanently, that’s our loss, but
it’s also fine: we try to cast the net as wide as possible,
but Flickr is never going to be for everyone. And if you
change your mind and keep using Flickr, I can’t promise
that any particular issue is instantly fixed, but I can
promise that we work really, really hard and Flickr will be
better in three months than it is now and better still in 6
months (and 9 months, or 12, or 48)

> most people are able to make a general distinction along the
> lines of, say, G, PG-13 and R

I think it is funny that movie directors and producers have a hard time guessing what rating the MPAA will give their work.

So, you can see photos of my cat again, and a selection of pin-up photos. It sounds like they’re honestly trying to make distinctions for ratings — at least amongst themselves. But there are still many unanswered questions — which I emailed to Stewart. My still-unanswered questions are pretty obvious when you read his email, namely: Exactly which photos of mine did he personally censor? It would help me understand their TOU, since I’d restricted many settings of racy photos, myself. I thought I already was doing “the right thing”. I also want to know, how can I — can anyone — prevent this from happening, again? I know I have received special treatment in this situation, and I want to acknowledge that I know it’s not fair to others who are facing the same problems. And now, I have photos to upload from my weekend and I don’t know how to classify them, or if I should use my other service. I still have no idea what’s okay, and how to make the call around what is and isn’t going to get me penalized again (as a paying customer, natch). Confusing.

It seems to me that since the “think of the children” wording is so vague in Flickr’s TOU, this would be a great opportunity for them to make changes that set a concrete example on where they stand, both with how they serve the many communities that use Flickr, and also to the wider culture. The “what’s okay in Sarasota” community standards for obscenity prosecutions is already dubious enough in any context; applying that to a worldwide data network of community clusters is just not going to work.

This touches on a much larger issue that I think is the Achilles’ Heel of 2.0 (especially community and social networking) businesses. Trying to build a business about creating community while hoping to avoid making room for human nature. Sidestepping sexuality (Flickr), attempting to weed it out of community clusters (Tribe), or trying to pretend it doesn’t exist by blanket censorship (YouTube). Each of these responses punish users. And none of them work, and are a constant battle, and destroys relations between the businesses and the communities they’re attempting to serve (and make money off of). It also adds a lot of confusion to conversations about what businesses are legally liable for, what’s permissible and legal for individuals.

Thomas Hawk has some very interesting things to say about all this here (omg kewt photo!). Daniel Terdiman over at Cnet puts all this in a wider context with Flickr’s China censorship here. And Robert Scoble says oh hai wtf here.

And — thank you sooo much for your support in favoriting this horribly scary photo in an effort to raise awareness about the censorship issue.

Update: I received another thoughtful follow-up email from Stewart about Flickr’s guidelines that is well worth reading.